All of the proceeds from concessions and T-shirt sales at the inaugural Guns and Hoses Softball Game went to CASA, a Grant County organization that provides “court-appointed special advocates” for neglected or abused children that have been taken from their home.

Leslie Hendricks, the executive director of CASA of Grant County, said that she was shocked when she heard the two city departments were hosting a softball game to benefit the organization.

“I was shocked when they told us we were the beneficiary,” Hendricks said. “This is the first time CASA has been approached to do an organized benefit of this magnitude.”

According to Hendricks, the police officers and firefighters are the first people who children interact with when they are removed from their home.

“It’s neat to see the two departments walking around here and asking people for donations to CASA,” she said. “Those guys are our front line and see everything firsthand that we deal with later.”

Hendricks said that the donations raised at Thursday’s game will go towards paying the volunteers at the organization.

“We have almost 50 volunteers who spend their free time focusing on these children’s cases,” she said. “I think it’s important to funnel this money to people who have worked hard.”

According to Hendricks, the money will also provide training and appreciation events for the volunteers.

Johnny Law came to the game and took photos with children while Sgt. Chris Butche handed out stickers and pencils.

“It is good to see the public coming together tonight for a great cause,” Butche said. “From the posters hanging around town to the advertising on the radio, this event has been a great effort on everyone’s part.”

At the beginning of the first game on Thursday, the police officers weren’t scoring nearly as many runs as the firefighters.

“The police department just needs to get warmed up and they will do better next game,” Butche said. “If they don’t, some of those guys will be getting teased at work after tonight.”

According to Butche, the police officers held practices before the game on Thursday to warm up.

“They got together a few times, but it’s hard when everyone works a different shift,” he said.

Butche said that both departments participated in the game for the same reason.

“We are all here to help a local organization and serve Marion,” he said. “It’s just what we do.”

Janet Jones of Marion went to the game on Thursday to watch one of her friends play.

“It’s exciting to see them play on the field without their typical uniforms on that we see them in everyday,” Jones said. “It has been a great game to watch so far.”

All of the proceeds from the game on Thursday will directly benefit CASA in Grant County. 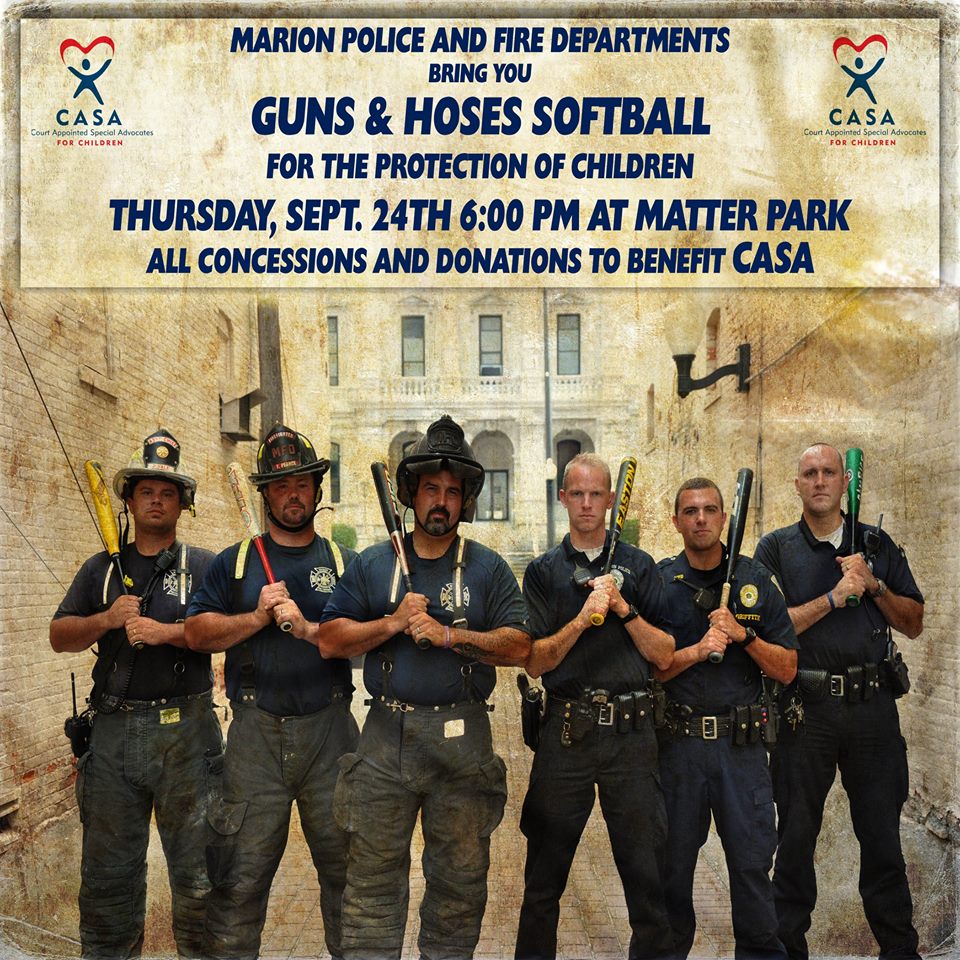